Our Team Ministry of Power 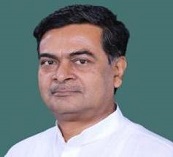 Sh. Raj Kumar Singh is a former Indian bureaucrat and presently the Minister of Power (Independent Charge) in the Government of India. Sh. R. K. Singh is a native of Supaul district in Bihar and a Member of Indian Parliament since May 2014.

Sh. R K Singh is a 1975 batch Bihar cadre Indian Administrative Service officer and a former Home Secretary, Govt. of Bihar. He was District Magistrate in East Champaran and Patna in 1980s before joining State Home Department in 1997. As a Joint Secretary in the Ministry of Home Affairs from 2000- 2005, he revamped the Scheme for Police Modernization and started the Scheme for Prison Modernization. During 2006â€“2009, he served as the Principal Secretary in road construction department, Govt. of Bihar and played an important role in improving the conditions of roads in Bihar.